SoHo stands for south of Houston and is a world-famous shopping paradise and artist district in Manhattan, NYC. Bordered by Houston Street, Lafayette Street, and the western part of Broadway, you’ll find a lovely, bright part of the city that has become world-renowned, in part due to the fact that it has been a backdrop for so many films and commercials.

Is SoHo worth visiting?

This NYC neighborhood is, without hesitation, absolutely worth visiting. It’s filled with a variety of shopping stores, art galleries, restaurants, and the cast-iron architecture which SoHo is known for is always great to look at. Aside from the many shopping opportunities, it’s also the neighborhood for many celebrities and figures.

A lot of them stay in this area when they visit New York City. For example, Rihanna was spotted staying at the Mercer Hotel. On any given day, you’re most likely to spot a celebrity or a model if you look hard enough. Actually, you might even walk by one and not even notice. Because of its popularity and demand, Soho is one of the most expensive neighborhoods in the city.

Our top 5 things to do in SoHo

SoHo is famous for so many reasons. There are a bunch of attractions, stores, and restaurants that it can be overwhelming especially if it’s your first time visiting. It’s a popular neighborhood and is very busy throughout the whole year. Here’s a list of what we highly recommend.

These are the attractions worth checking out in Soho

What else is there to do in SoHo?

SoHo NYC is filled with a bunch of activities and events. There’s always something going on here. Our top 5 above are things we highly recommend but to be honest that list doesn’t stop there. There’s something for everyone in this wonderful neighborhood. Depending on the time of the year, SoHo can be filled with seasonal pop-up shops or activities on the street. If you’re into photography, this is a great place to photograph as well. Here are some more things to do in SoHo.

As we mentioned above, depending on the time of the year, SoHo hosts numerous pop-up events. The latest one we went to was the popular Friend’s Pop-Up.

If you’re big into photography, then make sure to bring your camera to this neighborhood. SoHo fashion is some of the best fashion in the country and the art scene is top-notch as well. If photographing people isn’t your thing, then you also have the option of shooting the cast-iron buildings.

The Drawing Center in NYC is a SoHo museum that focuses on historical and contemporary drawing and is one of the best things to do in SoHo since its opening in 1977.

The Film Forum in SoHo/Greenwich Village is a non-profit theater that’s known for showing independent flicks. If you’re a big movie person, this place is for you. The theater opened in 1970 and is an iconic spot.

If your time is limited and you want to check out as much of SoHo as you can, then we recommend just taking a bike. You’ll be able to see the many cobblestone streets, the art, and many fashionable people. It’s a lot to take in but definitely worth it.

NYC is filled with many tours and a lot of them pass through SoHo. Whether it’s a movie-walk or just a general sightseeing tour, this part of NYC will most likely be involved. The neighborhood is known for its stores, people, fashion and is part of pop culture. Below are some of our favorite SoHo tours.

Where can I eat in SoHo?

SoHo is filled with many restaurants, cafes, and bars and the majority of them are very popular. You’ll have an array of dining options here such as Balthazar in SoHo, Jack Wife’s Freda, and the famous Dominique Ansel Bakery on Spring Street. There’s literally a place to eat in every corner of the neighborhood. Below are the places we have tried and recommend.

If you don’t want to necessarily dine-in, you can always check out some SoHo cafes. There are artisanal tea and coffee shops and bakeries throughout the neighborhood and are great places to visit for a quick break.

At the end of the day, if you’re looking to relax and unwind, SoHo is also filled with amazing bars and pubs. Make sure to visit Jimmy at the James, which is a popular SoHo rooftop bar where you’ll get an awesome view of the skyline and exceptional atmosphere.

Because of the high number of designer stores in SoHo, this district quickly became one of the most famous places to live and arguably the number one destination for shopping in New York City. If you’re looking for the latest trends, creative and stylish fashion, then make no mistake about it, this is the neighborhood to go to. You can also find well-known stores such as:

We also recommend checking out the Converse Speciality Store as well. They have good deals for our favorite casual Converse shoe and they have a “design your own Converse” corner where you can be creative and are able to decide how your shoes should look like.

SoHo also has a famous brand called Woolrich (125 Wooster Street). You can buy your warmest winter jacket here for 20% less compared to its European stores. A little further down Spring Street, Mercer Street and Prince Street, you will find the Apple Store (103 Prince Street) and the Michael Kors Store (101 Prince Street) with more stores to satisfy your needs.

The best Boutiques in SoHo

In addition to mainstream stores, boutiques in SoHo are cleverly curated shops that cater specifically to their customers. Boutique shopping in NYC is a great way to find unique pieces that you won’t necessarily find in bigger department stores. SoHo invites you to discover little creative shops, ran by young New Yorkers who sell their handcrafted products.

SoHo, New York is a lot more than just the big names of fashion magazines. Narrow alleyways, side streets, and sales carts on the sidewalks have a variety of special gifts and memories that you can purchase for a great deal.

Your SoHo shopping experience will be a memory that you’ll never forget, that’s for sure. Our personal tip – check out the MoMa Design Store on Spring Street. New York City has a lot of MoMa stores, but we think the one in SoHo is the best one.  Another tip – visit SoHo during the week because the weekend can be really busy.

For the longest time, SoHo has been a key element of the New York art scene. Because of extremely high rent prices in the area, most of the galleries have now moved to areas like Chelsea. However, SoHo still offers great art galleries that you can visit if you’re interested in it.

One of the best galleries in SoHo is the Drawing Center on Wooster Street. They recently extended the space by another 50% making it even more worth visiting. Some other interesting galleries are 287 Spring (287 Spring St) or Team Gallery (47 Wooster St). During your walk around SoHo, you’ll see many other spaces that could tickle your fancy.

What are the best SoHo hotels in New York City?

Staying in SoHo has many advantages. You’ll always be surrounded by some of the best atmosphere, bars, restaurants, cafes, and shops in NYC. If you decide to stay in the neighborhood please check out these amazing hotels.

Our Perfect Day in SoHo 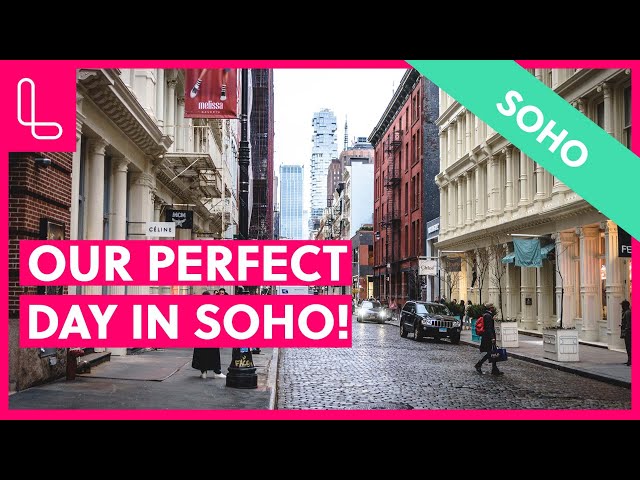 Like we mentioned before, SoHo can be very overwhelming since there is so much to explore. It can be difficult where to start first and there are just so many things to do in SoHo. It’s impossible to see all of SoHo in just one day. However, if you follow this recommendation, we can assure you that your visit to the neighborhood will be smooth and fun.

SoHo is an amazing place to visit and is one of the best places to visit in Manhattan. It’s definitely an area that tourists should check out. Once you’re finished with SoHe make sure to swing by the nearby neighborhoods below.

Things to Do in Chinatown NYC

This is definitely one of the places you don't want to miss visiting when you...
Read more

Things To Do in The Lower East Side

Things To Do in East Village

How do I get to SoHo?

Commuting to Soho is pretty simple. there are multiple trains that you to the neighborhood. You can take the R W to Prince Street. The B F M and to Broadway/Lafayette, or the 6 to Spring Street Station.

If you enjoyed SoHo, below are similar neighborhoods that we think you’ll enjoy. Also, if you’d like to check out the areas with a  guided tour, make sure to look into our favorite walking tour of Little Italy, Chinatown and SoHo.

The Best Things to Do in the Meatpacking District

The Meatpacking District counts as one of New York's hippest districts. While it started off...

Things To Do in Flatiron and Gramercy

Located to the east of Chelsea, the neighborhoods of Gramercy and Flatiron in New York...

Things to Do in Midtown Manhattan

Midtown Manhattan has endless skyscrapers, full sidewalks, and the streets are filled with honking and...