The stellar New York pass reviews have definitely been part of the reason why so many people have jumped aboard. In total there are 5 different passes for New York City, each with their own benefits and possibilities to save money.

The simple answer: They save you a ton of money. There are 5 main passes which are all slightly different, meaning that you can find one that suits your specific needs. As the New York pass reviews show, they can make your NYC trip much easier and help you save money & time!

We have traveled to NYC over 20 times, each time using one of the many passes to save us money and see both the top attractions as well as some hidden gems. As we often found it hard to know beforehand how much we would save with each of the passes and whether they would really be worth it, we have set up this page to share our and others New York pass reviews with you.

How to save the most money? Easy! All you have to do is find the right pass for you. We have tried to make your life a little bit easier with this article because we truly believe that exploring a city shouldn’t be as expensive as it is without a pass. Find everything you need to know about the 5 passes below, including our and other people’s comprehensive New York pass reviews.

Featured Deal: Save 20% EXTRA per person!

The New York Sightseeing Pass is one of the best deals you can find out there! If you want to visit NYC attractions on a budget,  look no further. The pass allows you to visit as many NYC attractions as you want for a daily flat rate, giving you the opportunity to explore freely without having to worry about the costs of individual attractions!

How does the New York attraction Passes work?

The New York Sightseeing passes work like a discount card where you get to buy one ticket instead of a lot of single ones. By doing so, you’ll save a lot of money in comparison to buying every single ticket on each own.

When heading to the attraction, have your New York Pass ready and present it to the ticket counter. You will receive a ticket in exchange.

There are two groups of New York Passes

1. Passes based on attractions

2. Passes based on the days

The second group of NYC sightseeing passes is the ones that are focussing on the days you will be able to use them. These passes are the New York Pass and the popular Sightseeing Pass NYC. You can visit as many attractions as you want within the time frame you purchase. This may be 1, 2, 3, 4, 5, 6, 7 or 10 days.

You are not sure yet, which NYC attractions you would want to visit? Head over to the best attractions in New York City that you shouldn’t miss when traveling to the Big Apple.

How to find the right New York pass for you – My tips!

Due to the many different passes, you can pick one tailored to how long you are going to be in NYC and how many consecutive days you want to spend sightseeing. 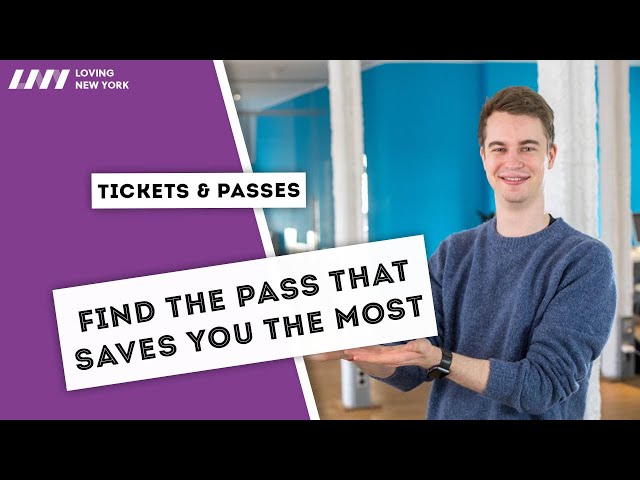 My reviews about the New York City Attraction Passes

Alongside the 3 main passes which are most frequently bought by people looking for an NYC attraction pass, there are 4 others that shouldn’t be overlooked. Around 95% of people go for one of the big 3 but in order for you to make an informed decision and save the most money, we have included a quick comparison below.

This way you can pick the one that is most fitting to your needs, which in turn means that you will also be able to save more money.

What exactly is the New York Pass? The New York Pass is the most popular sightseeing pass for New York City. You can purchase the New York Pass for 1, 2, 3, 4, 5, 7 and 10 days and you can visit up to 100 attractions. I have used this pass a lot of times and keep recommending it to my friends and family when they are traveling to NYC.

A big plus is that the New York Pass includes One World Observatory, most of the main attractions in NYC, a few fast track options and a decent amount of boat tours as well.

Comparison of the expenses with the New York Pass (5 days):

The Flex Pass is attraction based and starts at $69. As one of the main competitors of the Go New York Pass, this sightseeing pass offers a lot of flexibility.

Check here for more information about the pricing.

DON’T MISS: With our promo code ‘LNYOFFER’ you save up to 20%

How much is the Sightseeing Flex Pass?

Comparison of the expenses with the Sightseeing Flex Pass (7 attractions):

There are over 90 attractions included in the Go NYC Explorer Pass making it perform exceptionally well in our New York pass reviews. Many of the attractions are very diverse and allow you to see NYC from completely different angles which I personally really like about the pass.

With cruises, bus bike and walking tours all included you will be able to explore NYC in every way possible making this truly one of the most diverse passes.

Check out the complete list of attractions here. We have also listed some of the most important ones below so you can get an idea of what’s included. If you want to spread your attractions over several days with the option to take a break for a day in between, the Go New York Pass is a great choice.

Comparison of the expenses with Go New York Card (5 attractions):

The pass also one of the only ones to include admission to Edge on its list of attractions, making it especially great for those who want to visit the tallest building in the Western Hemisphere. The only attraction it does not include is Top of the Rock. Check out the full list of attractions here.

Pricing for the Sightseeing Pass NYC?

DON’T MISS: With our promo code ‘LNYOFFER’ you save up to 30%

Comparison of the expenses with the Sightseeing Pass NYC (3 days):

Many of the attractions included in the CityPASS are iconic to NYC and are definite must-dos. While the attractions list does include quite a few museums, it also includes the option of a sightseeing cruise or a ferry to the Statue of Liberty which are both great options.

The Top of the Rock observation platform is also included and you can even visit the Empire State Building twice in one day meaning you will get to see the city from above during once during the day and once at night if you like! We definitely recommend this as watching the city turn dark before the lights in the skyscrapers start to sparkle is an amazing experience.

Costs for the CityPASS New York

Comparison of expenses with the CityPASS:

I'm a true New York fan! Not only have I visited the city over 20 times but also have I spent several months here at a time. On this blog, I want to share everything I have learned and discovered, so you can have the best time in the greatest city in the world!

Are you trying to decide which New York Pass is the best for you?

Where do you enter the promo code?

the 7-day pass is currently priced at $299 (with promo). You can enter the code right below the price table BEFORE selecting your pass 🙂 Once you’re at the checkout there is no box for the code.

do the passes really allow you to skip the line? We are coming to NYC on 15 feb for 4 days, and want to make the most of our time. I know the lines for the Empire State building get really long – I’ve looked at the Express tickets on their website and they cost $70-80 per person. Can I really fast track past the queues with the New York Pass?

you won’t have to get in line to get a ticket. It says “Skip the ticket line by presenting your pass at the General Admission turnstile, after passing security”.

ah – I understand – you skip the ticket line but you don’t join the fast track line, you then join the normal line to queue to get up.
thanks.

If we purchase a New York Pass for 3 days , can we only use the hop on and off bus tour on one of those days or all 3?

with the New York Pass, you only get a 1-day ticket. If you want to use the buses for all three days, have a look at the Sightseeing Day Pass in our New York Pass comparison.