The Empire State Building is arguably the most renowned skyscraper in New York and one of the most popular sights of the city. Located in the heart of Manhattan, it is an iconic symbol of the city. One of the many reasons for the fascination of the Empire State Building is its lighting. Every night, the top of the building lights up in a variety of colors.

The always-changing lights on top of the Empire State Building display a different set of colors every night which means there’s always a purpose of witnessing the beautiful building. The building should definitely be included on any one’s to-do list. The iconic NYC skyscraper dons its very own zip code, 10118 which is a testament to its popularity.

Everything that you ever need to know about the Empire State Building including fun facts, ticket prices, hours of operation, the observation platforms, how to get to the skyscraper, and tips and tricks on how to avoid long wait lines are covered in this article.

Video about the Empire State Building 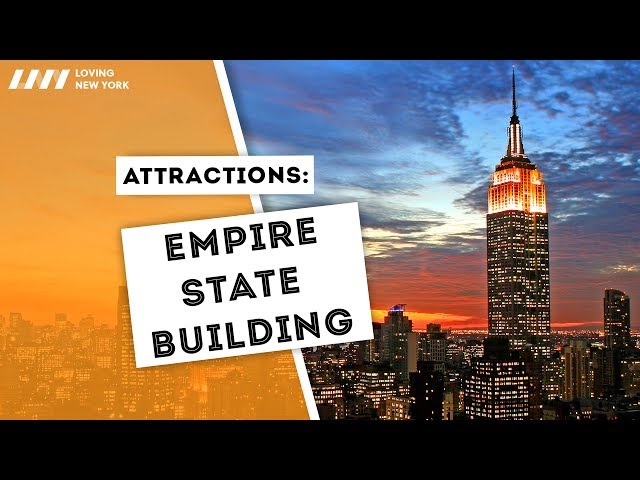 What is the Empire State Building?

The Empire State Building was designed by architect William F. Lamb of Brooklyn and erected within a construction period of only 18 months. The official grand opening took place on May 1, 1931. The architectural style of the building is Art Deco which is continued on the interior. The inside of the famous building is nothing short of amazing – the lobby, for example, is completely clad in marble. It is located in Midtown, Manhattan on 34th Street and 5th Avenue.

How tall is the Empire State Building?

Following the tragic terrorist attacks of 9/11, it became the dominant building of the New York skyline and is now only surpassed in height by the new One World Trade Center.

Where is the Empire State Building located?

Generally speaking, you cannot miss the Empire State Building – it stands tall above the other buildings and is easy to locate due to its distinctive top. Especially in the evenings and at night: just keep your eye out for its gleaming, illuminated top section.

The exact address of the Empire State Building is 5th Avenue between 33rd and 34th Streets in Midtown, Manhattan. It is centrally located in Manhattan and is only a few minutes walking distances from many other famous spots such as Herald Square, home to the worlds’ largest store department store Macy’s, (5 minutes), Times Square (14 minutes), Madison Square Garden, and the Flatiron Building (both approx. 11 minutes walk away).

The iconic building unveiled a new entrance end of August 2018. The exact address is now 20 West 34th St. We’ve been there to take a look at the new entrance:

Illumination of the Empire State Building

What makes the Empire State Building truly special is the top of the skyscraper. It illuminates the streets of NYC with dazzling colors, which frequently change every night. The lights are split into three levels – the lower section, middle section, and the antenna can all separately light up in different colors.

The illumination is often in the theme of current events, for example, the Super Bowl winners or holidays. When Germany won the World Cup 2014, the top of the building was illuminated in black, red, and gold!

Other popular colors of the Empire State Building

Every year, 3,5 million people visit the Empire State Building and its two observation platforms. Only Times Square receives more visitors! One the observation platforms – also called observation deck – is on the 86th floor and soars 320 meters above the streets of the city – this height gives you stunning views of New York City. When it is really clear, you can see as far as 50 miles and enjoy the amazing 360º view!

You can also go higher and take the elevator to the 102nd floor. The tickets are approx. $20 extra. They just redesigned the 102md floor of the Empire State Building and reopened this part as one of the last sections of the complete renovation last year. The 102nd floor of the Empire State Building costs extra, but also offers you an even better and more peaceful view of New York City.

Ther is only a certain amount of people allowed on the 102nd floor which makes this experience more private.

It is much better to buy the tickets in advance – and avoid the long lines! Just like Top of The Rock, here at this amazing skyscraper, you’ll get beautiful views of Manhattan.

Our first tip: buy tickets online! Tickets are cheaper and you don’t have to stand in line at the ticket counter! You can then use the tickets at any time. You do not have to specify a specific date or time for your visit.

The Empire State Building Without the Wait

If you bought your tickets for the Empire State Building and its observation deck in advance – or you have one of the 3 New York sightseeing passes – you won’t have to wait in line at the ticket counter and can proceed straight to the security check. There are also Express Tickets that allow you to go directly to the elevators — once you pass through the security check, which you cannot skip.

Up to 100 attractions and tours are included in the price of a New York sightseeing pass. Learn more about the passes here:

With so many different sightseeing passes out there, it is easy to feel overwhelmed. This New York Pass comparison guide is here to help you easily spot the differences between all major New York attraction...

Get yourself an NYC Pass. You pay a fixed price and can then enjoy many attractions and tours in New York without paying for entry tickets separately (you can save up to 70% compared to regular ticket prices in this way!). The tickets for the building are included in many passes.

We bought the New York Pass, which included the Express Tickets, and could thus bypass the queue to the ticket counter. This saves you some serious time. You can buy the New York Pass here. A comparison of the three passes is available here. Empire State Building tickets start at $28 for children (age 6-12), adults pay $34. Seniors receive a discount of approximately 10% meaning Tickets for seniors cost $30 (age: 62+).

There are a number of tours that you can experience at the Empire State Building. One of my favorites is the sunrise tour, where you get to see the NYC skyline from atop of the Empire during sunrise.

This is an especially romantic day, and the top of the premises is fully illuminated in red – the color of love. The observation platform is a wonderful place to let your thoughts wander as a couple and gives you an experience that you will look back on fondly for a long time!

Proposals on the Empire State Building

Do you want to ask the question of all questions? There probably is not a better place in New York City for a marriage proposal than the observation deck of the Empire State Building! My tip: propose on a Thursday, Friday, or Saturday. Because on those days, there is a saxophone player who will provide the perfect, romantic atmosphere (from 9 pm to 1 am)! If you would prefer a little more privacy, avoid the peak times, and come to the skyscraper late in the evening. Good luck!

How to Get to the Empire State Building

The subway Lines M F B stop one block away at the “34th Street Herald Sq.” station. Another option is to take the green subway Line 6 , which stops 2 blocks away at the “33rd Street” station on Park Avenue.

Once you arrive at the Empire State Building, you may often run into long queues. That does not necessarily mean that the observation platform will be completely packed, however. The reason for the long line is often the security check that everyone has to clear before entering the lobby. Only a limited number of people are allowed to be in the lobby at one time.

FAQ about the Empire State Building

1. When is the best time to visit the Empire State Building?

If you want to avoid a long queue, it is best not to come during peak visiting hours. From 8:00 am to 11:00 am, crowds are fairly light. Based on our experience, late afternoon or late evening are also good options. Even if you decide to visit the observation deck of the Empire State Building at the spur of the moment, you can avoid waiting for a long time by either buying tickets in advance or buying one of the three New York sightseeing passes.

You pay a fixed price and can then enjoy many attractions and tours in New York free of charge (you save up to 70% compared to purchasing regular tickets separately!). The ticket for the Empire State Building is included in all three passes, so it is basically free! Here you will find a comparison of the three passes.

2. Can I take a wheelchair or stroller to the observation deck of the Empire State Building?

Yes, that is not a problem. Elevators take you straight to the top – where everything is wheelchair-accessible (including the bathrooms).

3. Where exactly is the entrance?

The entrance is located on 34th Street between 5th and 6th Ave. You can easily recognize Empire State Building employees by their burgundy colored uniforms.

4. Can I use my ticket multiple times?

No. Tickets are only valid for one visit. My tip: go in the late afternoon. Then you can watch the slow transition of New York during the day into the New York of the night. Those are two highly distinct impressions – really nice!

5. How much does it cost to go to the Empire State Building?

Depending on the type of tour you take, costs will vary.

Other Articles About the Empire State Building

Top 10 Things To Know About The Empire State Building

One of the most popular and most impressive highlights of New York City is the...

The Empire State Building: Is it worth going up to the 102nd floor?

Everyone who visits NYC has one thing in common: they want to see the Empire...

In 2015 the famous Empire State Building, located in the heart of Manhattan, opened a...