Everyone who visits NYC has one thing in common: they want to see the Empire State Building. But, visiting the iconic skyscraper is not as straightforward as it should be. However, there are far more other options than you may have thought. You can actually visit another platform at the Empire State Building which is the 102nd floor. The 102nd floor was closed for 10 months for renovations and recently opened again to the public.

We went to find out if spending an additional $20 was worth it. Let’s compare the Empire State Building 86th floor vs the 102nd floor: 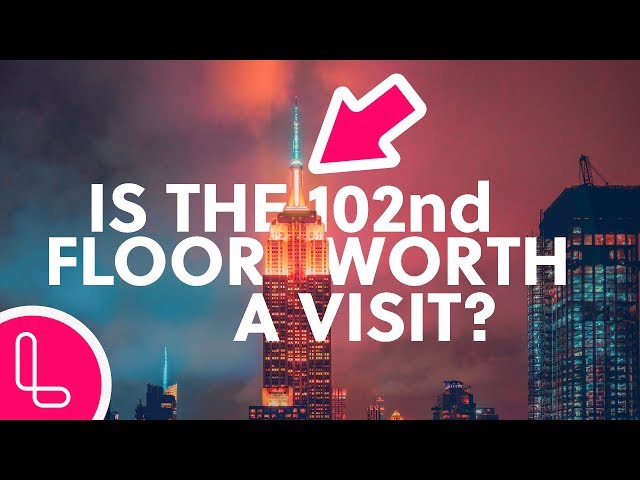 Can you go to the 102nd floor of the Empire State Building?

The Empire State Building is one of the most visited sights in New York City. It’s an unforgettable experience when the doors of the elevator open up on the 86th floor and you can admire the maze of skyscrapers at a vantage point of 1,250 feet. Many of you are wondering if it’s worth paying extra to go to the 102nd floor and without taking away too much, I’d say YES.

We had only ever been on the 86th floor, however, until recently. We decided we had to test the next observation platform for ourselves – after all, it is 16 floors higher! After 10 months of renovation, the 102nd floor of the Empire State Building finally opened in October 2019. One thing is for sure, the Empire State Building’s 102nd-floor observatory view just got even better. It’s definitely one of the best observation decks in New York.

What is on the 102nd floor of the Empire State Building?

The 102nd floor soars to a total of 1224 feet over Manhattan. The visitors will discover a 360-degree expanse beautifully showcasing the incredible views of the Hudson and the East River, the World Trade Center, Central Park and the iconic Chrysler Building.

In the past, the space on the 102nd floor was smaller and wasn’t really offering these stunning views that you get today. Now you’ll find windows with mammoth floor-to-ceiling glass panes. Each window weighs at about 450 pounds and offers the best conditions for the perfect selfie with the beautiful New York City skyline in the background. Of course, the glass is colored to protect the visitors from the sun, but it is still an amazing experience to go on the 102nd floor of the Empire State Building.

Check out our pictures below to get an idea of the view and what it looks like when you take pictures through the large windows on the 102nd floor. We spoke to one of the staff members and they told us that guest traffic will be controlled on The Empire State Building 102nd floor. Paying an extra $20 should be worth it, so they want every person to be able to face a window without feeling that this part of the Empire is too crowded. 16 floors below is often the case.

Pictures from the new and improved 102nd-floor view

So is going to the 102nd floor worth it? Yes, it is, if the Empire is the only observation deck in NYC that you are going to visit. Even though the views from 16 floors above are largely the same and taking photos is also much more of a challenge due to the thick glass windows we think that the 102nd floor of the Empire State Building is a great add on to your overall experience.

After the renovation of the 102nd floor, the observatory at the Empire State Building and the entire experience including the also recently renovated lobby, the new museum and much more are finally there to meet the 21st-century expectations. The 102nd floor reminded me of a little bit of the One World Observatory. Also, for other vantage points, check out The Top of the Rock or Hudson Yards observation deck, Edge.

Where to buy tickets for the Empire State Building?

Our favorite ticket is the Express Access ticket, as it comes with an audio guide and allows you to skip all the lines, saving you a lot of time (keep in mind you will still have to go through security).

Visit on Sundays! This is your best chance at avoiding long lines!

Get personal tips & tricks, specifically tailored to your trip!

We will provide you with individual tips & tricks as you prepare for your trip. How to plan, save money and make sure you experience the most of NYC are only some of the topics covered!

My Budget Tip: The tickets for the Empire State Building are included in the New York Passes!

Up to 80 attractions and tours are included in the price of a New York Sightseeing Pass. You can save up to 70% on attraction ticket prices with a pass! Learn more about the passes here:

With so many different tourist passes out there, it is easy to feel overwhelmed. This New York Pass Comparison is here to help you easily spot the differences between all major New York attraction passes...

About the author
Sabrina

Calling New York City home is still pretty surreal. After moving here 5 years ago, I still see it as my dream life. Ever since I’ve been exploring this amazing city for Loving New York I’ve grown to love it even more. I love hooking all of you up with the inside scoop, top attractions, events and everything in between. I'm your go-to person for the hidden gems, best restaurants and the absolute best things to do in the city that never sleeps.

Hi
Could you tell me if the floor is transparent on the 102nd cos I’m scared of heights. I can manage the windows but not the floor. Thanks.

the floor is not see-through. This will be the case for “The EDGE” that is opening in March 2020. It will just be a part of it though.

I agree, the trip up to the 102nd floor on the Empire State Building is definitely worth it. The view is amazing. 5 Stars. By Gregg L. Friedman MD