J.K. Rowling’s bestselling books and movies have finally made it to Broadway in the form of a dramatic and exciting sequel to the Harry Potter saga. The two-part show has won the 2018 Tony award for the best play on Broadway and is already the highest-grossing Broadway play of all time!

What is Harry Potter and the Cursed Child about?

Harry Potter and the Cursed Child is an original new story by J.K. Rowling. The story takes place many years after Harry Potter’s last adventure “Harry Potter and the Deathly Hallows” at the end of which, Harry, Hermione, Ron, and Draco are bringing their own children to the Hogwarts Express.

That’s where the story picks up. When Harry Potter’s son Albus first arrives at Hogwarts, not only must he face the challenge of living up to his famous father’s reputation but also must carve his own path in the school’s hallowed halls. Nothing is ever simple in Hogwarts and Albus’ adventure is both nostalgic for fans of the original series and packs plenty of its own twists and surprises for seasoned and new viewers alike.

We can’t tell you more at this point, as we don’t want to reveal the entire story for you. At each viewing, fans are given collectible buttons with the phrase #KeepTheSecrets, reminding us not to give away any spoilers. 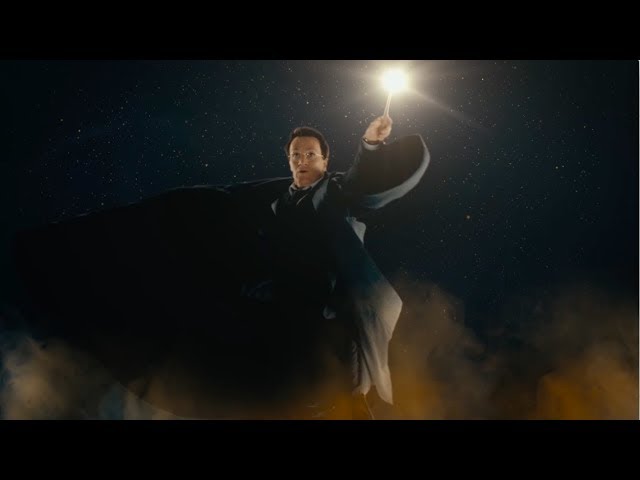 Harry Potter and the Cursed Child is divided into two parts. You do need to watch both parts to get the full story. For that reason, most tickets are offered as a combo. We highly recommend booking parts 1 & 2 together, as there is limited availability for single tickets, meaning you may end up going home having only seen one part.

I personally enjoyed watching both parts in one day. The schedule was perfect to grab dinner and discuss our predictions, theories, and reactions to the first part before returning to the second half. As you are very close to Times Square, you’ll have plenty of great dinner options: we recommend Don Antonio (delicious pizza with deep-fried dough) for a great sit-down dinner or The Counter (custom burgers) for a quick bite. For more restaurants in the area, check out our Midtown Insider Guide

Buying Harry Potter and the Cursed Child parts 1 & 2 together is typically less expensive, as there is more availability! Tickets start at $99.

The Best Seats for Harry Potter and the Cursed Child

You will have the best view, sitting in the front Mezzanine section, which is called Dress Circle in the Lyric Theatre. Why? You are not too close to the stage, but also not so far that you’ll miss any of the magic. Most importantly, there are two particular parts during the show where you will appreciate having a more complete view of the theater.

If the center mezzanine section is taken, opt for the right side of the theater facing the stage. There is one particular scene in the play where it will be a little harder to see from the very left seats. We sat in seats G 9 and 11 and were barely able to watch the scene. Do not choose the boxes on the left side or any number above 11.

My Review of Harry Potter and the Cursed Child on Broadway

The play brings ‘magic on Broadway’ to a totally new level!

The play is completely true to the source material but has been updated to include more humorous moments. It was written specifically for the play, which took years to convince J.K. Rowling, who was originally very opposed to the idea. On Broadway, you’ll get to see the original Harry Potter and the Cursed Child cast from London, including Jamie Parker as Harry Potter, Noma Dumezweni as Hermione, and Paul Thornley as Ron.

Do I need to be a Harry Potter Fan to watch the play on Broadway?

No, but fully enjoying the play requires having prior knowledge of the saga. However, the playbill comes with the synopsis that you can read when you arrive. It helps you catch up if you haven’t read all books or seen all movies, but it’s also nice for those who’d like to refresh their memories. Considering that the last Harry Potter movie came out back in 2012, most of us will need it!

While my boyfriend has read all books, including the playbook of Harry Potter and the Cursed Child itself, I have only seen the first three movies. Despite having different degrees of familiarity with the source and background material, we both absolutely loved the play. As of right now, Harry Potter and the Cursed Child is unquestionably my favorite play on Broadway and also one of our 5 Best Broadway Shows in New York right now.

About the Lyric Theatre

The Lyric Theatre is one of the most beautiful theaterson Broadway. It was constructed in 1903 and has only recently been renovated, specifically for Harry Potter and the Cursed Child. You will see that even the walls and carpets are Harry Potter-themed. During the play, you will notice even more, but as we do not want to spoil the surprise for you, we’ll just leave it at that. Even the outside of the theater has the most elaborate design of all Broadway theaters (see picture below).

With its 1,200 seats, the Lyric Theatre is one of the larger theaters on Broadway. Compared to other theaters, like the Music Box, the Brooks Atkinson Theatre, or the Eugene O’Neill Theatre (The Book of Mormon) you will also enjoy more legroom!

What’s the age limit to watch Harry Potter and the Cursed Child?

Kids need to be at least 10 years to be admitted to Harry Potter and the Cursed Child on Broadway.

How long is Harry Potter and the Cursed Child?

Where is Harry Potter and the Cursed Child playing?

Harry Potter and the Cursed Child is currently playing in the Lyric Theatre on Broadway. The theater was formerly known as “Foxwoods Theatre”.