A helicopter ride over NYC is the best way to get an aerial view and see all the sights the city offers in the shortest amount of time. The Grand Island helicopter tour is a comprehensive flight that takes visitors past all the famed landmarks, from Times Square and Central Park to Ellis Island and the Chrysler Building. 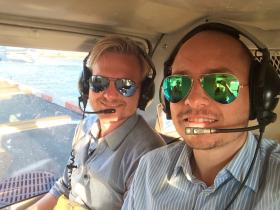 This allows you to see more in just minutes than you would in an entire day by car or on foot, making this the perfect tour for first-timers wanting to see the whole city.

What Attractions Will You See?

Ascending into the Downtown Manhattan Heliport sky, it’s time to prepare for thrills on this helicopter ride over NYC. Passengers are given an up-close view of One World Trade Center, the Statue of Liberty, and the Brooklyn Bridge. Other sights that will be seen on this tour include:

What Is The Ride Duration?

The ride duration for the Grand Island helicopter ride over NYC is between 15 and 20-minutes.

The Grand Island helicopter ride NYC begins in Downtown Manhattan and heads toward the historic Brooklyn Bridge. Visitors will also get a great view of the East River that separates Manhattan from Brooklyn. The helicopter will then soar toward the New York Harbor, where the Statue of Liberty is situated.

Next, passengers will continue on through the East side of Manhattan to view historical buildings such as the Chrysler Building and the Empire State Building. Next up are some of New York City’s most prominent sights, Ellis Island, Central Park, and Times Square.

The flight then heads toward the Bronx to get a bird’s eye view of one of America’s most expensive sports venues, Yankee Stadium. This is followed by a flyover of the George Washington Bridge, and the Governors Island National Monument. Traveling back toward the departure point, guests get a view of Zip Tours’ home base, as well as the New York Harbor, Queensboro Bridge, and finally, the Williamsburg Bridge.

The Grand Island helicopter ride NYC price is $363 per person. The cost includes the cost of the ride ticket and local taxes. Please note that gratuities, hotel pickup and drop off, and heliport facility, and security fees of $40 per person are not included in the price.

In the end, you can’t beat this helicopter ride NYC price. It essentially takes you over all of Manhattan and parts of the other boroughs. So, rather than having to wait in line to get photos of NYC’s most iconic attractions, this exhilarating ride takes visitors right past them and is tons of fun!

These helicopter flights are very similar to the Grand Island Helicopter Flight and are also very popular:

Are you planning a trip to The Big Apple? If so, then you should consider...

No trip to New York is complete without a helicopter ride over NYC. With everything...

Have you ever seen the sights of New York City from the air at night?...

I'm a true New York fan! Not only have I visited the city over 20 times but also have I spent several months here at a time. On this blog, I want to share everything I have learned and discovered, so you can have the best time in the greatest city in the world. By the way: Did you like my article? Then think about becoming a supporter of us on Patreon!

Stop South Ferry
Line(s)
1
Did you like this article?